We are sad to announce that on March 13, 2021, at the age of 75, the head of the Department of Physics and Theoretical Mechanics of KhNTUA, Doctor of Physical and Mathematical Sciences, Professor Oleksandr Ivanovych Spolnik passed away. This is a huge loss for our university and the entire scientific community of Ukraine.

We express our sincere condolences to the family, friends, and colleagues of Oleksandr, to all who knew this wonderful man and a great scientist.

Eternal and bright memory for him…

Oleksandr Ivanovych Spolnik was born on September 3, 1946 in the city of Kharkiv. He graduated from Kharkiv State University. Gorky at the Faculty of Physics and Technology, majoring in Physics.

After graduating from the university from 1970 to 1979 he worked in the largest scientific center of Ukraine – KFTI of the USSR Academy of Sciences as an employee of the laboratory of crystal physics, where he defended his dissertation.

In the early eighties, OI Spolnik moved to the Department of Physics of HIMESG to the position of assistant. During these years, the branch Laboratory of Radiation Engineering was founded and worked fruitfully at the department. OI Spolnik made a significant contribution to the development of radiation technology. In particular, with his participation, a level indicator “GR-10” was developed, which was introduced into serial production at the Ministry of Electronics Industry. This device received a diploma of the second degree of the Exhibition of Achievements of the National Economy of the USSR (ENEA).

In 1984, OI Spolnik received the title of associate professor of physics, and from 1989 until recently he headed this department.

OI Spolnik is the founder of the scientific field, which involves the development of radio spectroscopic methods for the study and control of defects in the crystal structure of solids. To conduct these studies, Alexander Ivanovich created a large creative team, which included teachers of the department and researchers of NSC KIPT.

In 1996 he defended his doctoral dissertation on “Magnon scattering and the width of the ferromagnetic resonance line in solids with defects” and received a doctorate in physics and mathematics, and in 2003 – the title of professor.

O. Spolnik is the author of more than 200 scientific papers, the results of his work and his students are recognized worldwide: they were regularly presented at international conferences in Poland, France, Australia, and other countries, published in central professional journals on solid-state physics.

As a teacher, OI Spolnik paid great attention to improving the processes of learning, development, and implementation of new methodological measures. He proposed and implemented in CDTUSG a method of multilevel teaching of physics, which makes it possible to increase the degree of mastering the discipline and bring it closer to special profile disciplines.

The main purpose of educational and methodical activity OI Spolnik was to provide the educational process with textbooks and teaching materials that correspond to the current level of teaching physics.

OI Spolnik is the author of more than 50 printed educational and methodical works, 9 textbooks and manuals, and more than 140 methodical instructions.

Educational work OI Spolnik saw the involvement of as many students as possible in scientific and technical creativity. Scientific works performed by his students have repeatedly won prizes in reviews-competitions of student research papers.

For many years of fruitful work and personal contribution to the training of highly qualified specialists in 1995, O.I. Spolnik was awarded the Diploma of the Ministry of Education of Ukraine, the Diploma of the Ministry of Agrarian Policy of Ukraine, the badge “Excellence in Agricultural Education and Science” of the III degree. He was also a graduate of the competition “Higher School of Kharkiv – the best names” in 1999-2001 in the nomination “Best Teacher of Fundamental Disciplines”.

Under the leadership of O. Spolnik created a team of experienced professionals who have significant scientific, methodological, and educational experience. All this allowed the staff of the department to train highly qualified specialists in the field of agricultural production…

We sincerely mourn the death of Alexander Ivanovich. We will miss him very much.

administration of the Institute of PFP,

the staff of the Department of Physics and Theoretical Mechanics 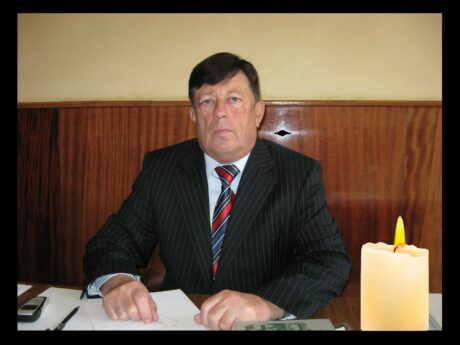