OUR UNIVERSITY NAMED BY HIS NAME

Today marks the 120th anniversary of the birth of Peter V. Vasilenko (1900-1999), whose name is inscribed in golden letters in the history of domestic agricultural science and technology. Since May 2004, the Kharkiv National Technical University of Agriculture has been bearing this name, where the memory of P.M. Vasylenko and continues the best traditions of the scientific school created by him.

P. Vasylenko went down in history as a famous scientist in the field of agricultural mechanics, mechanization, electrification, and automation of agriculture, doctor of technical sciences, professor, academician of VASGNIL and UAAS. He was born on October 17, 1900, in the village of Migiya of the Pervomaisky district of the Mykolaiv area. After graduating in 1919 from Olginsko-Skarzhyn Agricultural School of the 1st category he worked as an instructor in agriculture.

In the autumn of 1920, he was sent to study at the Migiy Agricultural and Cooperative Technical School, which at that time had the status of a higher educational institution. After graduation, he received a certificate as an agronomist. In 1932, the certificate was replaced by a certificate of graduation from the Luhansk Agricultural Institute (now – Luhansk National Agrarian University).

The outstanding scientist became one of the founders of the Ukrainian Academy of Agricultural Sciences (UACEG), where he worked as an academician-secretary of the Department of Mechanization and Electrification from 1957 to 1962 until its reorganization into the Southern Department of VASGNIL. On December 7, 1977, VASGNIL was awarded the Gold Medal named after VP Goryachkina.

In 1991, he was elected a full member (academician) of the Ukrainian Academy of Agrarian Sciences (now – the National Academy of Agrarian Sciences of Ukraine). P.M. Vasylenko established a scientific school of agricultural mechanics in Ukraine. Under his supervision, 7 doctoral and almost 60 candidate dissertations were defended. He died on April 21, 1999, in Kyiv. Buried in the village. Novosilky (outskirts of Kyiv). 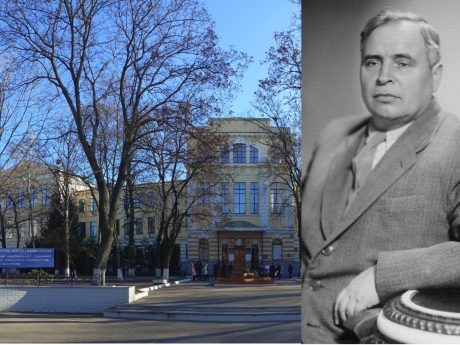