The Ministry of Education and Science of Ukraine has approved the distribution of living expenses of the State budget between higher education institutions for the preparation of higher education applicants under the terms of the state order in 2021. Indicators of large-scale activity, indicators of international definition, indicators of scientific activity, and other important indicators that determine the activity of free economic zones were restored here. According to the ORDER of the Ministry of Education and Science, in 2021 the Kharkiv Petro Vasylenko National Technical University of Agriculture received UAH 102,736,470.00 from the state budget, which is UAH 21,667,076.00. more, less in 2020.

According to the Ministry of Education and Science of Ukraine, the estimated contingent of higher education enrolled in KhNTUSG under the state order until 2021 (taking into account the results of this priority campaign) will be 3116.2 people, which is 213 people more than in 2020. This is one of the most important indicators that increase the amount of public funding of the university.

We hope that from 2020 the funding of Ukrainian free economic zones will be involved in the formulation, universities with better results will receive more funding compared to last year’s budget. The relevant decision was approved by the Government on December 24, 2019. For gradual transitions in 2020, restrictions on the minimum and maximum budget changes according to the Free Economic Zone were invited – 95% and 120% from 2019, respectively.

The Ministry of Education and Science calculates the amount of funding in 2020/2021 for specific demonstrations, which include: the scale of the university; a contingent of students; regional coefficient; positions in international rankings; the number of research costs that the university withdraws from business or international grants. To these indicators of the Ministry of Education and Science, it is also planned to add indicators of employment of graduates, which can be tracked through the online system.

The scale indicator encourages the establishment of higher education, which includes the use of resources. After all, universities with less than 1,000 students receive less, and those with three, five, and ten students receive more.

The level of monetary valuation that the university withdraws from business and international grants indicates that the institution is validated by donors and/or businesses. Using this indicator, the state encourages the university to develop science and diversify sources of money.

Graduate employment is an indicator that the Ministry of Education and Science starts using after the launch of an electronic system that will monitor whether graduates of a university will work in positions that require higher education. This indicator will stimulate universities to improve the quality of education, restore the needs of the labor market and promote the employment of their students.

The next step of the Ministry will be to join the relevant committee of the Verkhovna Rada, which develops and implements comprehensive changes to the legislation that will provide financial autonomy to the university. 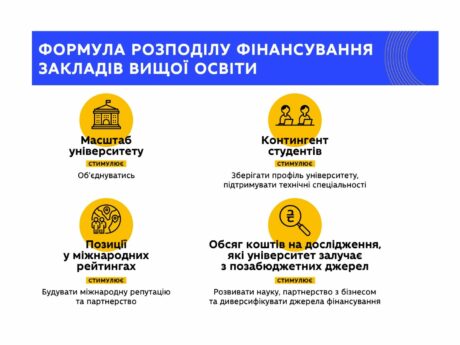